Like so many other teachers, I have heard a lot recently about how flipping your classroom is the cool thing to do. While I admire teachers who have the gumption to undertake that challenge, I never really gave it much thought or put it on my list of things to do.

It wasn't that I thought it was a bad idea, I just had a lot of reasons I didn't really think it was for me. (Some of these reasons, I realize are based on my own misconceptions of what flipping actually is. It happens.)

*If I were to describe my classroom, it is unapologetically based on constructivism. My kids learn by doing. This is not to say they are not guided in their discovery or are left alone in hopes that they somehow learn something, but we really focus on what it means to understand a concept and how to understand that concept based on your own knowledge and observations, not just because the textbook says it's true.

*In my mind, watching a video at home is no different than reading a textbook at home, you just get to say that you have incorporated some technology into your homework. We typically don't use textbooks unless we need to make a ramp, so this was a big hurdle for me.

*I'm really not sure what people mean when they say "it leaves class time open for all that cool stuff we wish we had time for."

*I had no idea how to make a video.

*Even if I figured out a way to make a video, I don't have time to do it. Plus, I don't really have the personality it takes to make a good one.

Then I went to a SIDLIT distance learning conference, where I sat in on a session by Aftab Merchant, who has flipped his anatomy lab at the Cleveland Chiropractic College. Since my entire existence as a teacher is based on lab experiences, it was the lab part that caught my eye, so out of curiosity, I went. It took about seven seconds, and I knew this was something I was going to try this year.

What he has done is to take every lab that he does and video the pre-lab. He walks students through the lab, shows them how to make the incisions, shows them where to find each structure and what it actually looks like. He makes sure those kids know exactly what will be expected of them when they walk through the door.

This is something I have struggled with in recent years. Kids are coming to me with an alarming lack of basic lab skills. For way too long, I had this assumption that they knew all of those things that should have been learned in the lab. What does a beaker look like? I know, but way too many do not. I know how frustrating it is for me, but it took me awhile to realize how frustrating it is for those kids.

So I tried it. Yesterday, I gave my chemistry class the assignment to watch the pre-lab video* of our Mass and Change lab. They were to come in today with any questions they might have and be ready to head to the lab.

Now, I fully anticipated kids not doing their homework. Shocking, I know. So our librarian was expecting a good number of them come down if they had not watched the video. In my first section, only four of the twenty had watched it. So off they went to watch the video. The other four started on the lab. Some finished the lab some did not. Those who need to finish will be in here during seminar catching up. They are not happy, but my feelings aren't all that hurt over it. We had a little chat about how very little homework we get in this class and how important it is to actually get it done when it is assigned. Apparently, word got out because everyone in my second section had watched the video.

Not gonna lie. This lab went so smoothly I can't even believe it. Last year, I spent about twenty minutes (longer than the video) going through the pre-lab and answering questions. And more often than not, I forgot something in at least one section. This year, I showed them where the beakers were located.

Even the kids thought it was a good idea. Some even got stuck on part of the lab and pulled the video up to watch it again. 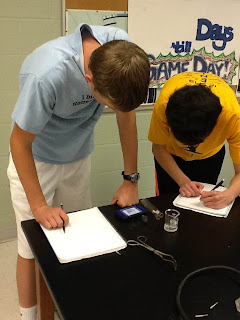 I hope. The first video I made took me most of a Saturday, so it's not something I can churn out at a very high rate, but I am thinking that I will get better at it. Now that I at least have an idea of how to set it up, the whole process should go a little more smoothly and with any luck I will be able to stay far enough ahead that I won't stress over it too much.

So what about you? Do any of you do anything like this? Or do you do something different?

*Don't laugh, this is a terrible video. Hopefully this will get better as I go along!
Tracie Schroeder at 10:24 AM