A Letter to My Colleagues...the BEST Robotics Edition

So I've been off the radar for the past month or so and the silence is killing me. Twitter gets read while waiting in the check out line. My Reader has 893 unread posts. And while I have been taking pictures left and right, I have no idea what day it is on my 180 blog.

For the second year, I have sponsored a Robotics Team at my school. Last year was a crash course for us and we were immediately addicted*. I never really followed up on that experience because it took me so very long to recover. Somewhere around February, I felt like myself again. Between that and just not sure what had hit me, I didn't really feel like I had any insight into the whole process. 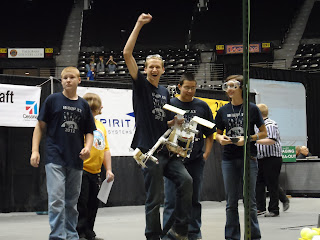 Now I am sure that I simply must convince everyone that I possibly can. This is something that you simply MUST bring to your school.

There are a few different robotics competitions out there. FIRST, VEX and BEST are probably the most well known, but we participate in the BEST Program. Initially, this was simply because I got a card in the mail inviting us to the competition. I have found out since that, for us, anyway, this was the "best" way to go. (I know. There is a lot of wordplay that can be worked in with that.)

When you start something like this at your school, word tends to get out. I have had a few teachers who have contacted me about starting a robotics team at their school and I cannot recommend it enough. When asked, I often find myself at a loss for words. There is really no good way to describe the chaos, the challenge, the excitement, the reward that comes from being a part of a program like this. It really is something that simply needs to be experienced.

1. There is something for everyone. This is not just about building a robot. This is a common misconception among just about everyone I talk to. The first part of the BEST competition is, of course, the robot. He**takes center stage because, well, he's the robot. Part two is THE Notebook. (This is actually how we refer to it as well; we treat it with the reverence that it deserves.) All teams are required to keep an engineering notebook that documents the entire process: brainstorming, prototypes, research, safety, recruitment, fundraising, testing, team building. All of it. The judges want to see that you didn't just jump in and throw something together at the last minute. They want to see how you decided on your ideas, how you decided whether or not something was going to work. They want to see the PROCESS at work. These two components are required for all teams to compete in Game Day.

There is then the optional BEST competition. Against all advice, we participated in this our first year. I made this decision because I had kids who would not have been a part of our team if we hadn't. This turned out to be a good idea for us.

Because then they want you to sell your robot. So you have this robot, huh? Why should they choose yours over someone else's? The marketing presentation is done a few days before Game Day. We get all dressed up and take the robot into a board room filled with men in suits. We present as a company and talk about our budget, our company, our process and our product. 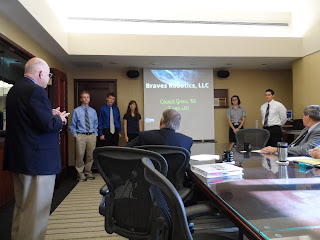 The fourth component of the BEST competition is the public relations booth. This is similar to what a company would have at a trade show and is set up at Game Day during the robot competition. It sort of ties everything together as it gives you a chance to show off your program to all the other teams. Pictures, CAD drawings, demographics and the ever popular free pen handouts can all be included here. 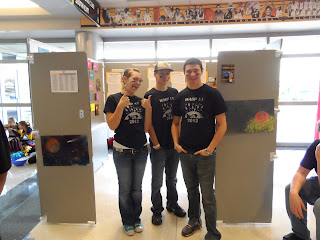 Finally, we get to the spirit component. As Game Day is going on, your team is judged on how you interact with other teams at the competition. Did you bring people that are not a part of your team? How about cheerleaders? A band? Are you making noise? All of this is important and makes for an amazing atmosphere on Game Day.

2. Sleep, clean laundry and cooking supper at home are totally overrated. However, should you happen to spend your birthday building a robot, kids feel like they need to celebrate with you and will bring you ice cream cake... 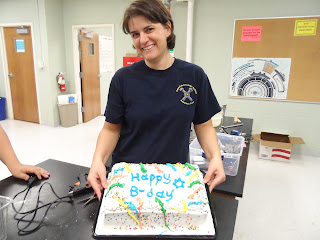 3. You don't have to buy anything. This was the deciding factor for my administration. Not only was there no registration fee, but we did not need to buy any supplies. Your BEST hub provides all the materials you need to build your robot. In fact, you are not allowed to use anything else. Not only does this cut down on cost, but it also keeps everyone on a level playing field. Now that is not to say that you will not need money. You will need to get your team to at least three activities during the season. You will need some tools. Power tools. We have our essentials: scroll saw, miter saw, jigsaw, cordless drill and screwdriver (two), sander and dremel tool, plus various hand tools such as a hammer, hacksaw, screwdrivers (large and small), bolt cutters, wire strippers, compass, ruler, scissors and solder iron. We have quite a bit of other tools running around, but these seem to be the basics. If you participate in the BEST competition as well, then you will run into printing costs for flyers and brochures, booth materials, poster board, glitter (apparently we can't do anything without glitter), markers. Not a lot, but I think I spent around $700 this year on stuff like that. 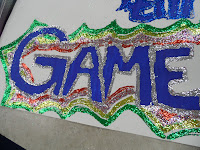 
4. You don't really need to do any labs in your chemistry class. You can totally convert your lab room into a machine shop. I have actually, for the most part, managed to contain the robot to one lab table and a corner. My classes know that they are not allowed to touch anything over there and I have not had any problems with that.

5. Insanity can be wonderful.

6. We in education give a lot of lip service to preparing our kids for the real world. We talk a lot about how important it is to turn homework in on time (every day) and why kids should only be allowed to use the restroom at the beginning of the hour and for goodness sake, do NOT exchange ideas with your neighbor. Sorry guys, that isn't getting it done. THIS is the type of experience that employers want our kids to have. They want to know that these kids have been presented with a challenge and come up with a plan to get it done. They want to know that this kid can work under pressure and not crack at the first hint of adversity.

7. Failing is okay. Just fail faster because we only have six weeks to get it figured out. Learn when something isn't working and move on to the next idea. Last year, our big downfall was not letting go of something that wasn't working. I had kids who became emotionally attached to an idea and couldn't let it go because it was "his" idea. This year we were much better about seeing when something really wasn't going to work out and trying something new. If someone just couldn't let it go, I had them build a prototype of the idea. While this took time, it gave us a chance to visualize and decide. Sometimes that led us off in a completely new direction, which is not necessarily a bad thing.

8. This is not just for the "smart" kids in your school. When I try to convince someone to join us, the number one excuse is "I'm not smart enough to build a robot." That type of thinking drives me insane anyway, but what really bugs me is that those kids really believe what they are saying. I had one of "those" students in my first hour this fall. He has a lot of issues that all culminate in him not being successful in school, but he would come in every morning and ask how the robot was coming along. His down time in class? Spent discussing with another student their next steps in restoring an old truck. Seriously? Not smart enough to build a robot? Please. Every once in a while, he would wander over to the chaos and look over what had been accomplished. Once I was explaining one of the problems we had run into and he made a suggestion. I told him to write it down and leave a note. He did and we ended up using a slight modification of his idea. He was interested, but I never could convince him to come to a meeting. I am going to keep trying because I think next year, I might be able to convince him to come around.

9. Your robot does not need to be overly complicated. Keep It Simple, Stupid is a good mantra to live by in something like this. This served us well this year. Our challenge was insane: our robot had to pick up stuff off the floor, carry it to the top of a ten foot pole and put said stuff into various containers. We knew with our young, inexperienced team that we would not be able to do it all. So instead of trying to make our robot move in two dimensions, we stuck with one: pick up the stuff directly in front of us and that was it. That whole complicated thing will come with time, but realizing our limitations was a giant advantage for us.

10. Seriously...have you ever BEEN to one of those competitions? Quote from our first year..."Game Day was like a professional football game, a college basketball game, a NASCAR race, and epic science all in one!" - Mary

Still think you can't pull it off? You can. Jump in. Accept the challenge. If we can do it, so can you!

We are a small school with 223 students in our 9-12 building. We are one of the smallest schools in our hub. This year, we had 22 members on our team roster, with 15 of those kids being the reliable, core workers. This was actually a pretty good number for me to be able to handle and keep on task. As the only sponsor (NOT recommended), I mostly just kept circling and asking whether or not there was something that needed to be done.

I am not telling you this will be easy. It's not. It is chaotic, exhausting, messy and pretty darn difficult. But you know that person who said nothing worthwhile is easy?

Yeah, that person was on a robotics team.


*I am finding that robotics is a lot like childbirth. While it is actually occurring, you start to wonder what in the world could have possessed you to do this, but a few months later you look back and think, hmmm...that wasn't so bad...

**Yes, we personify our robot. This year, it is a boy named Magic Mike. He has one arm... he had to climb a pole... anyway... didn't I warn you about the insanity here???


P.S.  This was written as an assignment in my graduate class as a way to explain the BEST program and why you should try it.
Posted by Tracie Schroeder at 7:27 PM 5 comments: