To Praise or Not

I have Collin in two science classes this trimester. He's a "band member" in every stereotypical sense of the word. That's what he wants to do in life. While I do happen to believe that you might want to be sober for a good portion of that lifetime, far be it for me to squash his dreams. For the first half of the trimester, he was either asleep or copying work from the person next to him.

The last couple weeks, though, he has woke up. Turns out, he is a pretty bright kid. Who knew?

He's excited about his Astronomy Observation Notebook and thinks it's just awesome to be able to identify objects in the sky. He has been participating in class discussions. He has been helping other students when they get stuck. His grades have come way out of the failing range.

Every day, I want to say something to him in praise of his new effort. I want him to know how good it is to see him working to his potential.

But then I don't. I have this sneaking suspicion that bringing attention to his behavior might just bring about the end. He seems to be right on the fence, and I'm afraid of upsetting that delicate balance. The very few carefully chosen comments I have dared to make to him have resulted in this really strange look where I can see him closing up and looking around to see if anyone overheard. It's almost like he is angry at himself for doing well in class.

Why is it such a stigma for some kids to succeed?
Posted by Tracie Schroeder at 8:51 AM 2 comments:

My kids have tapered off on the whole reassessment thing. No, that's not true. I think they may have forgotten about the whole reassessment thing.
I, however, have a feeling that the last few weeks of the trimester will have everyone panicking, coming in to my classroom at all hours, trying to raise their grade. I would really like to avoid that if at all possible.
We also took a test last Friday. It was okay, pretty much what I expected. My kids are very good at balancing equations, but can't write an ionic formula to save their lives. We have gone over it and gone over it and still, nothing.
So on Monday, we tried something crazy. The night before I made out review sheets for each of my targets. This included naming and writing formulas for ionic and covalent compounds. Turned out we only got through ionic, but it was nice to be somewhat prepared.
Anyone (all but two kids) who wanted to retest over ionic compounds got into groups of five and each got a review sheet.
Bonding 2 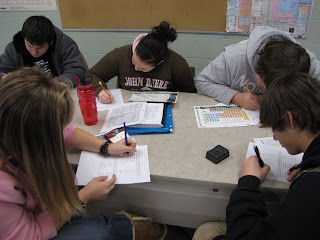 One of the key parts to this was that instead of plugging in their iPod and working in isolation, they took turns working the problems while explaining their thinking to the group. So not only did each student have to speak the words, they had to hear it over and over (and not from me!).

When the group finished the problem set, I scribbled (literally, I hadn't gotten far enough to print out) out a quiz on scratch paper and let them reassess. This is totally against my fight against short term memory learning, but I am making this up as I go. 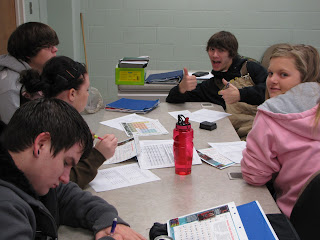 The goofy guy in the coveralls (it's REALLY cold here!) is my nephew. He is extremely smart but doesn't seem realize it. He is sitting across from my other nephew. He is extremely lost but doesn't seem to realize it.
This went over really well, although there are a few things I will tweak.
Groups of five are too big. That could just be a space issue in my room set-up, but there were a few individuals that didn't seem to really be a part of the group.
I also think next time I will give each GROUP a review sheet instead of each KID. There were a few that I kept having to get after to work with their group instead of on their own.
The response to this was overwhelmingly positive. There were more light bulbs going on during this hour than I have had for quite awhile.
Posted by Tracie Schroeder at 10:22 AM No comments:

I Think I'm Missing the Point

We took a test on Friday over Chemical Reactions. It was okay. Better than I thought it would be actually.

Mary (one of my brilliants) made a small, inadvertent mistake on one of the questions. She did not put a coefficient in front of one of her reactants. I know this was simply an oversight on her part, she just forgot to go back and write it in. I know this because I know that Mary knows how to balance equations. I have seen her do it. I have watched her work with unparalleled focus to balance the most difficult equation I could throw at her.

Yet, on the test, she missed it.

I started using SBG with all my classes this year, so it is kind of my test run. My rough draft with my standards and how it is I want to really have everything set up. Ideally, I would have all my targets perfectly written with a rubric to go with each one*. I would also have each target set up so a "3" means they can do the skill and a "4" means they can apply it.

I'm not there yet.

Right now, my "4" means you get it and "3" means you kinda get it. I have been assigning a "3.5" when you make small mistakes or miscalculations, just like Mary did on her test.

After I recorded all the grades, I sat down with my hot chocolate and while thinking about something totally unrelated, suddenly felt bad about the grade I had given Mary. I tried to ignore it, but it just kept coming back to me.

Yes, she made a careless mistake. Does that mean she can't do the problem? No, like I said, she has mastered the skill. Does that mean her grade should be lower because of that? At the same time, a perfect score suggests she was able to do the skill perfectly. Her reaction upon seeing the test was simply to roll her eyes and say "that was stupid."

I don't know. It seems like such a gray area. I could leave it up to teacher judgement and just give her the "4," but what happens when Taylor makes the same mistake? There seems to be a lot of subjectiveness that I wouldn't be able to defend one way or the other. Although if a student complained, I could just ask him to show me the skill. This is definitely an area I need to work on (probably over the summer).

Ugh, I have such a long way to go.


*This is per request from my principal, but also a pretty good idea.
Posted by Tracie Schroeder at 11:13 AM 2 comments:

Links to this post
Labels: philosophy, Standards Based Grading

Always check your trash for something that may not want to be thrown away. 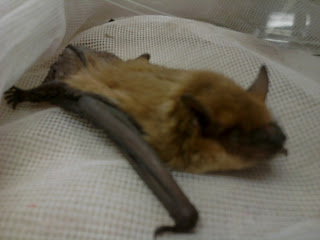 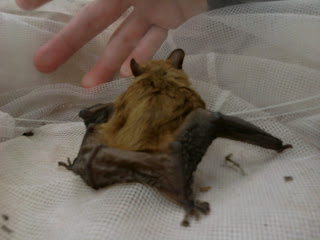 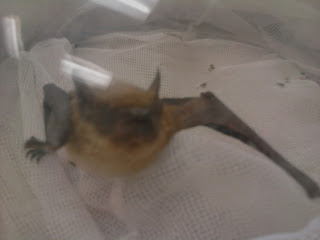 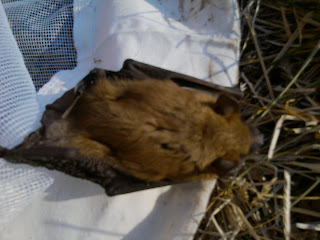 At the last minute, I decided to try the Modeling curriculum with my Applied Chemistry. I have 21 students in 2 sections. Only a few of those students come to my class without an IEP.
I debated for a long time as to whether or not I wanted to tackle modeling with these kids. Every indication I had up to this point simply screamed to me that the kids didn't like it.
But, being who I am, I ignored all that.
Actually, I looked long and hard at the arguments presented by those kids. What it boiled down to was that these kids were out of their comfort zone. They knew how to work the system and were upset that the system had changed. Having taught (almost exclusively) IEP and At-Risk kids for many years now, I am fairly confident that most of those kids don't really have a comfort zone when it comes to school. They were going to resist me no matter what I did.
So, modeling it was.
We are following the exact same curriculum that my regular chemistry class used in the fall trimester. The only modifications I have made have been to the math sections. A lot of my Applied kids haven't taken Algebra yet, so it didn't really seem fair to ask them to make those connections. We are focusing on the study of the particles and their behavior.
I did show them how to find the slope of our graphs (some even had a faint idea of where this was going!) and talked about what that slope meant. Several of them made connections to mountain slopes that my chemistry kids never even considered. That IS why it is called a slope, after all. I did not ask them to write the equations or try to come up with the constants on their own.
I do feel like I am walking them through a lot more than I did my chemistry kids. Whether I am doing this because of the makeup of the class or because of my experiences in the fall, I really can't say. Probably a little of both.
The big problem I have (and this is not new) is kids just not doing work. I had three lab notebooks turned in blank. BLANK. Nothing. Seriously, why even bother turning it in?
But that annoyance aside, the big thing here is that these kids are doing great. They are actively involved in the labs and the data interpretation. They discuss the results with their small group and participate in the large group discussion so much better than their "smarter" peers.
Overall, the experience has been so much better than last fall. I've even got kids wanting to read out of the text book.*
Direct quote: "Miss, I had no idea I was this smart!"
I'm so glad I took this chance.
*Most of these kids are in our Tier 2 or Tier 3 reading intervention classes, which means they are way below grade level. We have readings in the textbook as a reinforcement AFTER we do the lab and discussions.
Posted by Tracie Schroeder at 10:55 AM 5 comments: