So a "friend" of mine saw me at a ball game the other night. As we were leaving, she reminded me that I haven't been to the gym to work out lately and that she was going to be in an Insanity class the next morning at 5:30 and that I should be there*. I told myself that if I woke up in time without an alarm, I would go. Of course, my luck, I was wide awake, so I pull myself up and went to town. The first one was hard. The second one was worse. But the third one, I made it through with a bit of consciousness and actually heard the music in the background.

Now there is a certain track that goes along with these workouts. At first, it sounded just like any other music you might hear during a workout video, but as I listened, I noticed something.

Just as my brain was telling me how ridiculous it was to get out of bed for this, a voice came on and said "you can do it." It was subtle. If you weren't paying attention, or more likely if you were nearly unconscious, you would miss it. The words fit right in with the music.

So I listened more carefully. Sure enough, every time my brain tried to convince me I was an idiot, that voice, either as a shout or as part of the song itself, came back and encouraged me to push through.

As I lay staring at the ceiling, "cooling down", I thought about that voice. I wondered if there was some kind of deliberate plan to it. Did the creators of this horror do a bit of research and time it specifically so that there was encouragement when someone most needed it? The more I think about it, the more I have a hard time believing this was an accident. It was just too perfectly aligned with what I needed at the time.**

So it really got me thinking about my classroom. I teach a lot of things that push kids in directions they really do not want to go. They have to think. They have to participate. They have to learn.

They get frustrated. They want to quit. My job is to make sure they don't.

I never let them, but I wonder if I am giving them that encouragement when they most need it. Am I paying enough attention that I catch that frustration before it really sets in? When I yet again answer a question with a question, is that the last straw for one of them? Do they feel like I am just trying to make them fail? 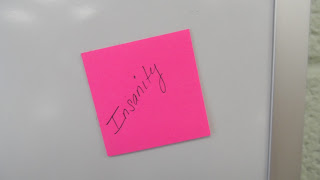 *There are so many things wrong with that sentence, I don't even know where to begin...

**If it WAS an accident, then it was a brilliant one.
Posted by Tracie Schroeder at 5:33 PM 2 comments: