For the last few years, I have had a comprehensive final test in my chemistry class, which was essentially a big retake on all of the targets for everyone. My kids hated it, and quite frankly, I was getting bored. My principal always refers to finals as a time to do some type of "cumulative activity", but I had yet to come up with an activity that covered all of my targets and still allowed for a retake situation.

A couple weeks ago, on a rare Sunday afternoon with nothing to do but ponder life, I had the idea that my final could take on the form of an Escape Room*. I said the words out loud, and my daughter, who happens to be in my chemistry class, was sitting across the room and loved the idea. And so it began. For the next 10 days, every spare minute was devoted to figuring out how to put something like this together. Because I had no idea. 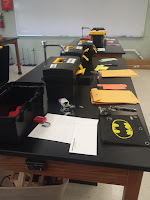 First, I had to see if I could get some supplies. I sent an email out to every staff member in my district asking if anyone had any locks and/or boxes they would be willing to share. I hit the jackpot when the principal at our elementary school replied saying she had four sets from Breakout EDU. I had found that company when I did my initial searching, but time and money were a factor that led to me crossing that off my list almost immediately. Although, in all honesty, I probably wouldn't have been able to pull this off if Heather hadn't have had the kits.

With supplies in hand, I started brainstorming what the whole thing might look like. I knew I wanted kids to do some type of experiment, so I decided on a precipitation reaction where they would need to create an exact amount of precipitate. This was similar to some things that we had done all year, so it wouldn't be a huge stretch for kids to be able to do it on their own. One big challenge was that I had two classes of 24 students during first and second hour. So no time to reset anything, and a lot of kids to put in motion. I decided that I didn't want each group to do the same experiment, mostly so that they wouldn't be able to just copy what the group next to them was doing. Based on the supplies on had, both chemical and physical, I ended up with four different reactions. In the end, I had four reactions with two different paths to each one so I could handle eight groups of kids in each hour. Basically everyone was solving for the same thing, but the clues were different and hidden in different places. I later learned that this is essential. I had one clue for two different groups hidden in the same place, and it became way too easy for one of the clues to get lost in the shuffle. Luckily, I had the foresight to color code each group. I would have gone insane had I not done that. It made everything so much easier to follow and the kids knew they had the right clue when they found the right colored paper.

At first, the end goal was for kids to mix up their own reactants, mix them together, isolate the precipitate, and determine the percent yield. I ended up writing down every step I would have done in setting up a lab and breaking that down into clues. Initially, I wanted kids to mix up both reactants, but in the interest of time, I decided to give them one already mixed. I also gave them the volume of the second reactant to mix up which just left them to figure out the mass to add in order to get the correct concentration.

Now it was "just" a matter of breaking it down into steps. Each step was going to have a clue that would lead to the next step. So I started with the scenario. Our biology teacher is retiring this year, so I decided he was going to go mad and release a virus on the school. One of his favorite projects every year is to incubate chicken eggs, so the virus would turn everyone into baby chicken zombies. Oddly, every one of my students thought this was a totally plausible scenario. Being so close to his room, I, of course, have succumbed to the virus and am of no help to anyone. Luckily, I was able to determine the antidote before becoming a zombie and left clues hidden around the lab room for my amazing chemistry students to find. While kids were for the most part on their own here, I did give them two question cards per group, so if they felt like they were completely stuck, they could get a hint. But only two for the whole thing. Every group hoarded those until the very end and some didn't even use one. But I think it gave them some peace of mind to know they could ask if they needed to.

The first clue was a coded message on the initial handout. It was a series of atomic numbers that told kids to go find something out of place in the lab room. (As a side note, writing sentences using only chemical symbols is HARD!) Around the room are manila envelopes in places that didn't make sense: hanging in the back of the fume hood, in place of a picture on a wall, behind an upside down periodic table.

This turned out to be really difficult to find since they didn't really know what to look for, but once the first group found the envelope, the remaining groups picked up on it fairly quickly.

Inside the envelope was a quiz that had kids balancing chemical equations. One of the rules of the game was that if it's a clue, then it's a quiz. The quizzes were done individually and preserved the retake portion of the final. Once the quiz was graded, then they were allowed to work as a group. For the second clue, the coefficient of the first reactant in each equation was the same for each quiz. This was the combination for the lock on a box sitting on their lab table. The problem was that I only had four locks with number combinations. The other four had letters. So I rearranged the equations so that the first letter of each reactant was the same. Technically, they wouldn't have had to balance the equations correctly to get the combination, but they didn't know that so it all worked out.

Once they opened the box, there was another clue and a key. The clue (quiz) was to determine the number of protons, neutrons, or electrons in a given isotope. When put together, the numbers formed another coded message. This was a simple 123=ABC code, but nearly everyone tried the chemical symbols again. Upon decoding, a riddle was revealed as to what the key unlocked. 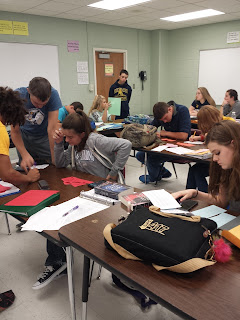 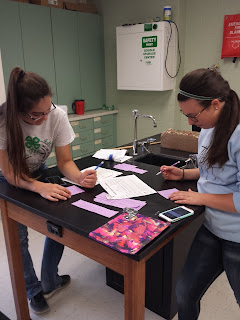 Unlocking the location, revealed an envelope and a locked bag. The envelope was some mass to mole conversions where the answer revealed the combination to the bag. Inside the bag was a paper torn into pieces. When put together, the pieces gave the final equation to produce the antidote. A couple of the pieces were missing, including the molarity of the second reactant. 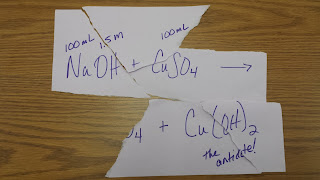 From here, there is an optional fourth clue that solves the combination for a bag that contains a much more detailed procedure. Actually, at any point, kids could have started the experiment depending on how comfortable they were with doing so. I had a couple groups think about it, but no one wanted to take that chance.

By the time I thought of it and put it all together, the entire thing was allowed four days. I really had no idea when I started if kids would fly through the clues or if they would get stuck on the first one. If I were to do this exact one again, I would definitely give them at least five days because we ended up being really rushed at the end.

Surprisingly, I only had one major screw up and that was with the color coding. I ended up writing pink group's equation on blue paper and vice versa, which really confused them when the final products didn't match up with their initial antidote. But we got that straightened out once someone finally got up the nerve to give me one of their question cards. I also misjudged how much product would be made. I didn't really think that through since I was rushed for time. Next round, I am definitely cutting down on the amount of antidote they have to make.

All in all, this was a great project and the kids (and I) had a lot of fun. It's definitely something I will try again.

If you need a place to start, you are welcome to steal and edit and do what you will...


*For those not familiar, an escape room is just what it sounds like. You are locked in a room with a few of your friends and have an hour to put the clues together and get out.
Posted by Tracie Schroeder at 2:18 PM

I must commend you for still having energy at the end of the school year to develop this creative activity that is stimulating and fun.

Thanks Michelle! I definitely would have benefited from thinking of this in January :)

THank you so much for sharing your resources!!

Great idea! Are you familiar with breakoutedu? www.breakoutedu.com

Thanks MrsB! I hope you can use it, it was so much fun!

Ben P - I came across their site when I started putting this together. I didn't get to far into the kits that they have for sale since they didn't look like what I was wanting. But the teacher at our elementary school had a few of the boxes and let me borrow those supplies. It would be so worth it to purchase those if you are thinking of doing one.

I absolutely love this idea! It gets the students engaged while also still providing them with the means to test and evaluate their knowledge. Unlike other boring assessments, this one gets the job done in an exciting way. Thank you for the idea and the resources.
spsipes.weebly.com

Thank you for sharing this incredibly creative idea. Great to see the engagement and especially for an end of year review activity.

I love this idea, but I have 4 chem classes back to back. How did it work with your two classes? Do you think this is doable?

Play escape room game for refreshing your mind. It works for me.
escape room in fort collins

This sounds fun! I’ve done escape rooms as review for tests. My question is you mentioned doing this as a final so how did you score it?