I have come to believe in the manipulative. It seems that anytime you can get kids to touch something they are learning about, it sticks so much better than if they just listen or read about it.

Trying to get my kids to understand the structure of an atom had always been a struggle. How to you picture something you can't see?
A few years ago, we had an Easter egg hunt for our track practice, so I had a hundred plastic eggs sitting in my cabinet. One day, while trying to explain the atom, I picked up an egg and asked the kids what we would find if we could open it up. This set off an amazing chain of events that led to the creation of this activity.
Each colored egg represents a different element. 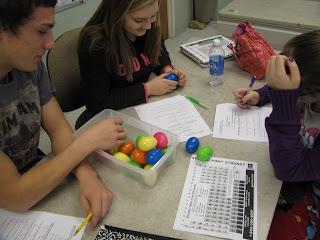 There are three eggs of each color and each egg represents a different isotope of the element. Each element has three isotopes. I wrote the isotope notation on the outside of the egg.
Inside each egg is a "nucleus" and electrons. I bought a bag of beads at a craft store and it just so happened that each bead had a mass of one gram. Seriously. I couldn't have done that if I tried. This lets me use the eggs as models again when we talk about atomic mass. The electrons are tiny little beads (relatively no mass) that constantly have to be replaced. I'm working on that.
I tied the big beads together to form the nucleus of each atom. The tying is important, otherwise your kids end up doing nuclear chemistry and that isn't our goal. 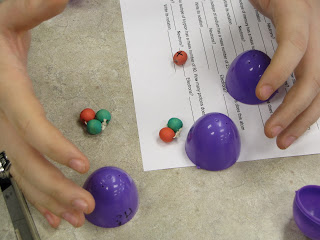 For example, the purple eggs represent Hydrogen. The red beads are the protons, while the green beads represent the neutrons. Each element has three versions with different numbers of neutrons, Hydrogen-1, Hydrogen-2 and Hydrogen-3. Everyone starts with Hydrogen to get the feel for the activity. I labeled the protons with a "+" sign so they can distinguish between the protons and neutrons. I did not do this in the other elements because I want them to realize the isotopes all have the same number of protons.
The kids then go through and answer questions about the atoms.
Structure of the Atom


This leads us into mass numbers and atomic masses. We keep these out for most of the unit and the kids are free to use them whenever they need a visual. While I haven't got any hard data to back it up, I can definitely tell a difference in overall comprehension.

What do you do to help kids understand those abstract ideas?


*Please note that when I say "Dummies" I don't mean my kids. I am actually talking about me.
Posted by Tracie Schroeder at 5:17 PM

I like this a lot. One of the principal challenges in chemistry seems to be helping kids to develop models for things they can't see (this is why I like the modeling curriculum so much) and this is a great example.

I love this idea. I teach a introduction to chemistry to 5th graders and they seem to get a lot of the basic ideas and this would help. We do lots of drawing (the basic 'solar system' model of the atom) and draw out the right number of protons and neutrons and such (I think oxygen is as big as we go, though).

We do a fun manipulative when it comes to molecules... we make them out of marshmallows. Big marshmallows are C, N, and O, while little ones are H. There are "rules" for how many bonds each can take. Even my 5th graders get it and they get to each a marshmallow or two! This likely too "little" for high schoolers, but it works wonders for the "hands on" for little guys.

I do the same kind of activity except with snack baggies...yeah, I know...boring. But, I have storage issues. I never thought to weigh the beads and extend to masses...may need to get new beads. I also include making a few baggie isotopes on their assessment...just another way to prove their knowledge.

I wonder if you could substitute the small beads with packing peanuts, which are of virtually no mass too and cheap