How We Write a Conclusion...Lab Skills 5

So what does that data mean???

That's always the big question isn't it? We take the measurements, make the mess, graph the data and then....

Well, traditionally, we answer an overly structured set of "right there" questions that really have nothing to do with the data, but perfectly mirror the textbook definitions that we want our kids to parrot back to us on standardized tests. Because, surely, if they can repeat the definition and maybe even remember the formula, then they understand the concept, right?

To be honest, for the longest time, I thought that was okay. I didn't realize that even though my kids could spit out the correct words, they probably weren't really getting to the heart of the concept. I had learned about density from a textbook and I understood it just fine, thank you, so surely everyone else could as well.

When I asked kids to write a conclusion, I was really just looking to see that they could write a coherent paragraph that somehow worked in the definition of whatever idea we were trying to cover. I rarely, if ever, asked them to explain how their data described that definition. One reason for that was because I knew they hadn't taken very good data, but another reason was simply that I myself didn't really know how to analyze data. This is actually something that I have always struggled with. For one, I am not very good at writing in general, but mostly because I didn't know how to explain what my data meant. This goes back to the fact that I didn't NEED the data (thank you, conclusion questions). In fact, for the longest time, I didn't even realize it had a purpose. Looking back, I am pretty hard pressed to pinpoint a time when I truly had to write a decent analysis. So I really struggled with how to explain to my kids about the importance of summarizing their data.* One of the first assessed targets I wrote was Lab Skills 5: I can analyze laboratory data in order to clarify the questions, hypotheses or methods of an experiment. I knew I wanted my kids to be able to do this, but it feels like it has taken me forever to actually get a handle on how to, you know, assess it.

Several years ago, I realized I was doing it wrong and started trying to change how I taught my kids to write that paragraph at the end of the lab. And for years I struggled to get them where I wanted them to go. This year, I had sort of an epiphany when I had a chance to sit down and really look at what I was teaching my kids.

I know I keep referring back to this, but the Modeling has been so good for me in so many ways. I also know I am a little slow on the uptake here, but this year, I realized that it breaks down a conclusion into four parts**. Now, many of you modelers will recognize these four different representations of data. We use words, numbers, mathematics and pictures to show what our data means. So this year, I have hit my kids pretty hard with writing good conclusions.

First, we summarize our data in words. Basically, we want to answer the lab's original question. What IS the purpose of our data? What are we trying to find? What is the relationship between the variables? I have a poster on my wall that shows how kids should begin their conclusion. And until we get the hang of it, all conclusions begin with the words "According to our data..."***

I have a lot of kids that want to try to simply summarize their procedure. They seem to believe that putting lots of words on paper will make it appear like they know what they are talking about. This might work if I didn't actually read the words, so sometimes I have to do a bit of steering towards why we did what we did. Our first lab in chemistry is a six part Conservation of Mass series, so we do a lot of walking through the entire lab write-up during the first few parts. I gradually take that support away and by the last couple parts, they are on their own.

A mathematical description of the data typically comes in the form of the slope equation. Algebra is a prerequisite for chemistry and our kids spend an awful lot of time with  y = mx + b. This is a perfect example of being able to spit out the "correct" answer but having no clue what to do with it. We talk about "x" and "y" being generic variables that can represent anything. We also talk about how we have independent and dependent variables in our experiment and we can substitute these variables in for "x" and "y". It never ceases to amaze me how long it takes for kids to realize that the term variable means the same in math as it does in science. In chemistry, we don't always have a mathematical relationship, as these are usually derived from graphs, but kids have to be able to recognize when it does not apply and that is apparently a lot harder than it might seem on the surface.

Assigning a number value, however, is done for almost every lab. Whether that number comes in the form of a ratio determining an empirical formula, a slope value giving us a density or an amount of recovered product, we can usually describe our data with a specific value in some form or another. In some cases, there can be more than one number to report, often in the form of the original data and then in percent error.

The last part of our conclusion is a particle diagram. Until I did the Modeling, it had never really occurred to me to have kids draw picture representations of what happened in the lab. Modeling is big on particle diagrams, whether it be the chemistry or the physics, and for some kids, this is no problem. For a lot more than I would have predicted, this is a huge problem. Because this is hard. You are looking at a whole new level of understanding when you require someone to draw a particle diagram of a chemical reaction. I have an amazing number of kids who can balance a chemical equation without being able to explain it in terms of the particles involved. This is really another example of being able to get the right answer without understanding the underlying concept.

About half way through the first trimester, I typed up some basic posters to stick on my wall. For some kids, I STILL have to point to each one in turn and remind them what needs to be included. 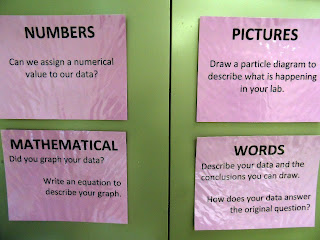 These were my rough drafts that I did on a whim. I plan on editing them a little bit when I get a chance, but that isn't too high on my priority list for this year.

I have done a decent job of sticking with assessing these four parts this year. I like, and I think the kids appreciate, the structure involved with it. If nothing else, it gives us a starting place. I am somewhat surprised I haven't changed it up at all. It is by no means perfect, but so far it has really done what I want it to. ****


*It has suddenly occurred to me that I did this backwards. No wonder my kids were struggling with conclusions...we weren't focused on the data...

**In my defense, Modeling workshops are extremely intense! You cover an entire years worth of material in 2-3 weeks. I am still trying to digest it all! I KNEW this in the back of my mind, it just didn't click until this fall.