So there has been kind of a barrage of events in the last week or so that have really got me thinking about how my classroom (and school in general) is set up. I know I am doing it wrong, I am just having trouble figuring out how to get it right.

First, Frank tweeted a link to a place that takes your online class for you and somewhere around 17 seconds later, Shawn posted his thoughts on it. "We’ve bred an entire crop of people who think school is something to finish. That learning is somehow terminable."

Later that day, our curriculum director sent us a link to an edudemic article discussing whether Minecraft is the new "ultimate tool in education". Now, my eleven-year-old loves this game, but I have never played it, so maybe I am missing out on a golden educational opportunity. But I doubt it. I am always a little leery when someone starts using video games as a major avenue for their classroom. I can see where there might be a place for something like Angry Birds or Endless Ocean on a limited basis, but to set up your entire class around it? Just not my thing. What I do know about the game is that you pretty much start from scratch and build your own world. Now, that is a good idea.

And then there was Monica, her hexagonal bubbles and an accidental capstone. It all started one morning with a failed attempt at paper mache. One of the girls who visits me every morning was looking at her friend's project. A balloon had been coated in tacky glue the day before and it was not sticking like all had hoped. So Monica was given permission to peel the glue off the balloon. This was kind of cool in itself because it all came off in a big sheet. So she wadded it up and played with it for awhile. Then came the questions. How does glue work? How can it be a liquid in the bottle but a solid outside? Can we make it a liquid again? 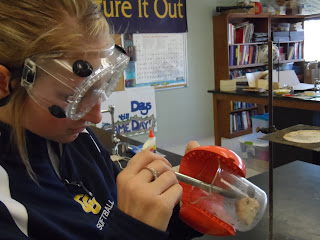 To be honest, I have no idea how glue works. The thought had never even occurred to me, so I told her she could heat it up if she would like to see if it would melt again. She did, and eventually discovered that this was not a physical change.* But then someone suggested that adding water would restore the liquid state. So she tried that. Nope, but the water boils up around the ball of glue in thousands of tiny hexagon bubbles. Now that is cool. 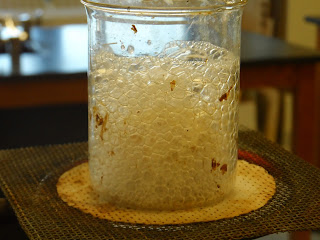 This started an entire chain of questions that just keeps getting longer. On the third day, I finally suggested that this could be a capstone if she were to write it up.

Then she got nervous.

Because she didn't have an answer that she thought was "correct." How in the world was she supposed to get points** for something when she didn't really know what it was. So we had a really good discussion that sometimes it isn't about what you know for sure, but what you don't know for sure. Because, really, she now has a whole list of things that she knows this type of glue is NOT. Sometimes, dear children, that is how science works.

This really got me to thinking about how I could make my classes a lot more like those before school projects. I know Shawn does an amazing job with this, and ultimately, I would like to move in that direction. I want to find out what I can do to get kids interested again; to make them curious about the things around them, and to not just turn to Google for a quick answer. I realize I am fighting an uphill battle, but I want them to realize that learning is beautiful and it really, truly is never ending.

*I cannot express my joy at her using those actual words.
**Grrrrrrr.....
Posted by Tracie Schroeder at 7:44 PM

Free Fire Mod Apk is the best hacking version to get unlimited coins, cash, and gold. I downloaded this mod from
free fire mod apk with fully working and excellent features. you can also download it for free from that site.